Hovercraft Owners/Operators from around the world met in September at Griffon Hoverwork’s manufacturing site in Southampton, UK for the annual Griffon Hovercraft user group conference.

The meeting provides an opportunity for hovercraft users to get together to exchange views and ideas on the best operating practices for these specialized but versatile craft.  It also provides Griffon Hoverwork with a forum to keep customers updated on new technologies in the field of hovercraft manufacture and operation.  Mike Whitlock was invited to present on some of the latest electronic technologies finding applications in hovercraft.

MES have provided the navigation and communication outfits for Griffon’s hovercraft for many years now.  Mike’s presentation included information on the recently completed mini integrated bridge system (MIBS) installed on the new Indian Coastguard hovercraft and some video footage of the system in action on board the craft. 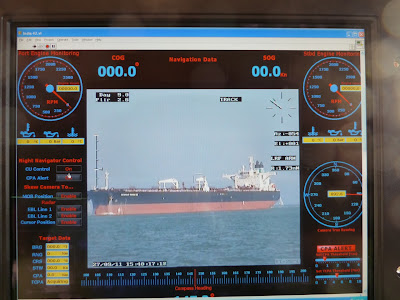 The core MIBS system comprises multifunction displays showing radar, electronic chart system and bespoke conning display (produced by MES specifically for GHL to display hovercraft controls and instrumentation).  A recent key additional component of the MIBS is the electro-optical thermal imaging camera system.  These systems are gaining significant popularity amongst coastguard and military operators and in this instance MES integrated the camera picture into the conning display and provided control from the radar and GPS. 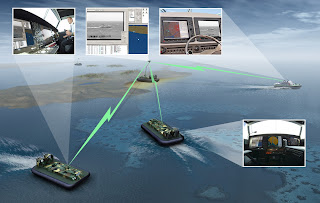 20 years on and the MES Navtalk still going strong

As a system integrator, MES generally uses third party products.  However, to help with bridge integration of such products we developed the Navtalk data splitter unit in partnership with Andy Fairgrieve of Aditel. Andy is a great designer of interface units and the Navtalk has proved this.  MES has now supplied thousands of Navtalks into the field.  The product, which was first conceived in 1992 was designed to enable the output for a single GPS to be split to provide positional information to the new GMDSS radio equipment which, through digital selective calling could for the first time automatically transmit the position of a ship in distress.  Since then, the Navtalk has evolved into widespread use as a NMEA data buffer/splitter for all kind of serial data applications and can be used for example as a gyro distribution unit, or a speed log distribution unit. 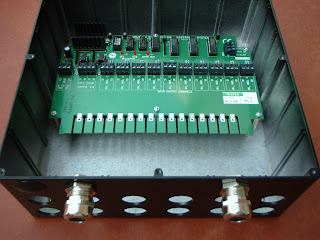 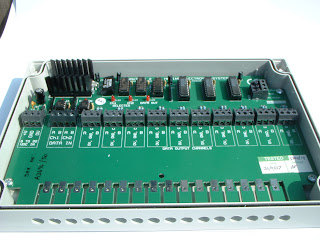 The legendary reliability of the Navtalk means that it does not even need to be considered as a potential single point of failure because put quite simply, failures are extremely rare.  The metal boxed version is used by some leading integrated navigation systems manufacturers.
Posted by Mike Whitlock at 20:59 2 comments:

Ollie Haselden and Richard Collett are just nearing completion of the commissioning of the navigation and communication systems on 2 offshore support vessels in Florida's Eastern Shipbuilding.  Another example of a successful collaborative project between GE Energy Power Conversion and MES.  MES was subcontracted by GE to provide the bridge equipment and GMDSS and internal communications systems.   The ships HARVEY CHAMPION AND KEITH COWAN will be handed over to US operators Seacor Marine and Harvey Gulf in the near future. 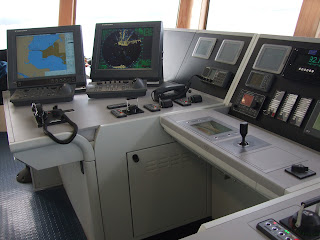 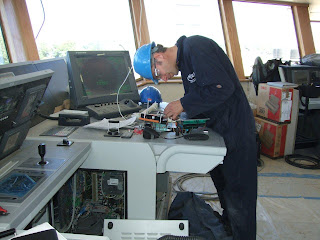 The pictures show the bridge consoles on the previous vessel in the series, HARVEY SUPPORTER.  These are a variant of the GE C Series consoles which are very well constructed and laid out to Harvey Gulf's preferred arrangement.

The photograph shows Richard Collett, one of our senior project engineers on the bridge of the BAE built OPV AMAZONAS conducting operator training for Brazilian Navy officers and crew.    When the ships where in build, Richard was the lead project engineer responsible for the system design and commissioning of the integrated navigation suite.  MES also provided the operational communications suite, a cost effective package drawing from a mixture of COTS and military radio equipment.  Versatility is something we pride ourselves in but training is not really a core activity for us however, the Brazilians reported at the end of his 3 day training that it was "the best course that they had received since arriving in Britain". 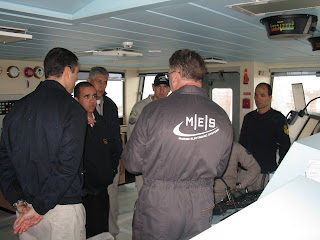 Recently Steve Howells and Ollie Haselden from Marine Electronic Systems (MES),  attended the WAVE RULER in Bermuda and the United States to identify and fix a fault in the X Band radar system.  Despite several previous service interventions by local support in the US, the fault was worsening and required Steve and Ollie to sail with the ship and stay on board for 10 days until a successful outcome was achieved.  WAVE RULER is a Wave Knight-class fast fleet tanker of the Royal Fleet Auxiliary (RFA) of the United Kingdom. 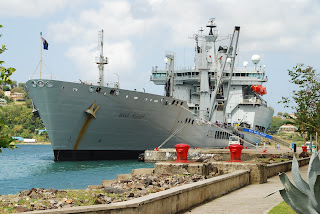 Captain Shaun Jones RFA, CO RFA WAVE RULER, said “I would like to thank MES for rapidly identifying the fault in WAVE RULER’s X Band radar system and coming up with a rapid, innovative and successful solution that ensured that the ship can return to full operational capability within the programme at nil penalty to UK commitments to APT(N).  Not only has full functionality been restored but also a significant improvement in capability has been provided in a very short and challenging time scale.  We look forward to working with MES in the future and many thanks to Steve Howells and Ollie Haselden for their professionalism and friendship during their stay onboard in Bermuda and Norfolk Virginia, US.”

Posted by Mike Whitlock at 16:57 No comments: